The best medicine in the world to stay healthy is the laughter. That is why every doctor will going to recommend you, to stick with happiness in your life. For that many of the peoples are doing their best work to stay India healthy by making India Laugh. Here we are pressing the Top 10 Most Popular Television Comedian of India List. 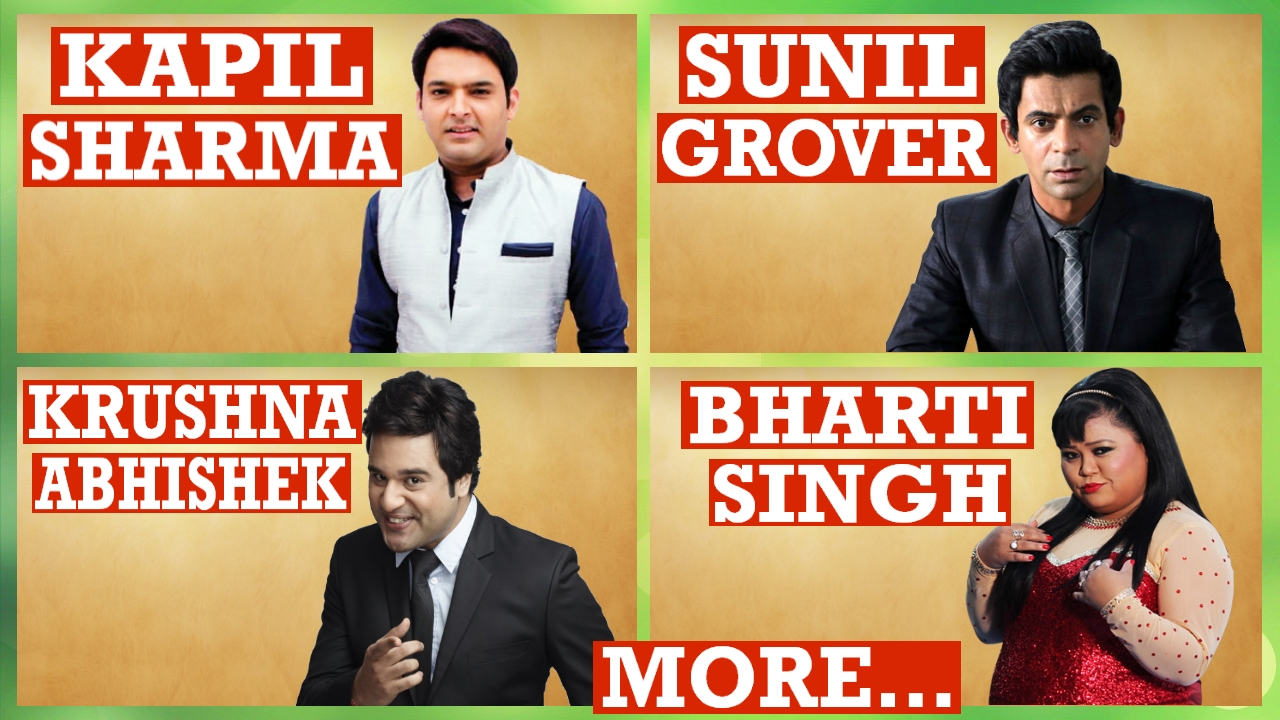 The man on the top of comedy world is Kapil Sharma. In earlier his career he appeared in many laughter shows, out of which comedy circus is proved as the biggest break for him, then he did around 9 to 10 season of comedy circus and won 6 seasons which help him a lot for achieving the goal. Then the year 2013 is the turning point of his career into which Colors TV interested to make show name as Comedy Nights with Kapil with him. That completely changed the way of his career and he became the richest comedian of the Indian television. This show was last for around 2 years. Then at the beginning of 2016 Kapil recall his all the team members and decided to recreate a new show called The Kapil Sharma Show with the collaboration of Sony TV. And nowadays show hits the number 1 spot amongst all the other comedy shows in TRP ratings. The Kapil Sharma Show recently completed its 130th episode. And in near future there is full assurance to be get funnier episodes of this show. As we know Kapil Played a lots of character throughout his career but the role gets most appreciation from the peoples is is ‘Rajesh Arora’. That’s why he became first in Top 10 Most Popular Television Comedian of India List.

Although he gone off from The Kapil Sharma Show but he is still on number 2 position in this list. The only reason is that he got very funny outline and killing sense of humor. Which make any one laugh? He is very versatile comedian with most of gags and punches throughout his act. He does have the art of mimicry of Bachchan Sahab, Dharmendra. He got most of appreciation from the people for his comedy role called Dr. Mashoor Gulati. Sunil Grover also acted in several bollywood movies like Baghi and Gabbar is back. He is of 40years old on last 3rd August 2017 and belongs to Dabwali, Haryana, India. He did a lots of television show which include comedy like Gutur Gu of SAB. The famous role or character played by him throughout his whole career is Gutthi, Rinku Bhabi and Dr. Mashoor Gulati. So that he came second in Top 10 Most Popular Television Comedian of India List.

Krushna Abhishek real name is Abhishek Sharma but he is popularly known by his screen name. He is known as extreme comedian and also a good actor. He did lots of Bollywood movies like Bol Bachchan, Its Entertainment, Kya Kool Hai hum 3 etc. he got success in his career by comedy shoe named Comedy Circus in 2008 and won 2 comedy circus seasons. He is very much passionate about dance and participated is Nach Baliye season 3 and Jhalak Dikhlaja season 4. He turned 41 on last May and belongs to Mumbai Maharashtra and he is the Nephew of Govinda. Sudesh Lehri is best and mentor of him. He has two children from his life partner Kashmira Shah. He did comedy show with Bharti called Comedy Nights se Bachao which is the sequel of comedy nights with Kapil once upon time it took 1st place in TRP Ratings. He is in third place of Top 10 Most Popular Television Comedian of India List.

She grown her career with show Comedy Circus and now she is the number 1 female comedian and hits 4 place overall in Indian Television. She is absolutely funny and got huge sense of humor due to that she can make anyone laugh very easily. She is now the Queen of comedy. She did lots of comedy shows as well as she hosted some reality shows like Indias got Talent. Recently she is been working with the Kapil Sharma Show for the role called Lalli. She is fat but she thought that fat people make easily laugh to audience. She turned 33 last July and belongs to Amritsar, Punjab, India. She is also appeared in Nach Baliye season 6 as a guest star and as a contestant in Jhalak Dikhlaja season 5. She made her debut in 2008 comedy show. The great Indian Laughter Challenge and appeared in many of reality shows, Fear Factor, Big Boss 6, 7 etc. With her great work, she became fourth in Top 10 Most Popular Television Comedian of India List.

Kiku Sharda is the well known artist who worked in very popular show called The Kpil Sharma Show. He Plays a lots of characters, out of which well known characters are Bachcha Yadav, Kachcha Yadav, Saroj, Bumper. He made his television debut in 2003 with Tv serial Hatim as Hobo of Star Plus. Further he did a lot of tv seriels, but in 2013 he got comedy nights with Kapil into which he done famous characters like Palak, Lachcha, Pankhuri and various characters. He got Indian Telly Award for best actor in supporting role comedy for Akbar Birbal seriel. He was also appeared in several reality show like Nach Baliye, Jhalak Dikhlaja season 7 as a contestant. He turned 42 on last February and belongs to Jodhpur Rajasthan, India. Who got married in 2003 to Priyanka Sharda at the age of 28.

Sudesh Lehri is one of the hilarious personalities out there, who has the ability to make people laugh by his body language. He made his television debut in 2007 through the show ‘The Great Indian Laughter Challenge’. He did several supporting role in bollywood movies like Ready, Jai Ho, Munna Micheal, great grand masti etc. Biggest break He got through the TV show comedy circus. Krushna Abhishek is one of the best friends of him. He was the second runner up from the Great Indian Laughter Challenge 3 after Kapil Sharma and Chandan Prabhakar. His partner contestant at comedy circus was Krushna Abhishek and they together won three seasons of the comedy circus due to which they gain popularity as Krushna- Sudesh Jodi. He turned 48 last year and he belongs to Amritsal Punjab, India. Krushna always considers him as mentor.

Sanket Bhosale is the rising star of comedy world in the industry of television. He is doctor by profession but  his passion is make people laugh. He is nowadays act in a comedy show called The Drama Company along with his co-star Krushna Abhishek, Sudesh Kehri, Ali Asgar. He is stunning mimicry artist and mainly famous for Sanju Baba;s mimicry. He made his mimicry debut in 2012 with life Ok channel show Laugh India Laugh and he was the runner up of this show. He is well known for the mimicry of Salman Khan, Sanjay Dutt, Ranbir Kapoor, Farhan Akhtar, Kailash Kher  and Sonu Nigam. He appeared in many of the shows as a guest appearance likecomedy ka Rocket, tata sky comedy channel, the Kapil Sharma show etc. he is also the anchor of MTV Beats. He is in relationship with comedian, actress and singer Sugandha Mishra. He turned 29 on last May and belongs to Mumbai.

The most comic person, who easily fits in ladies roles is none other than Ali Asgar. He made his debut on Indian Television in 1987 by tv seriel Ek Do Teen Char and on the bollywood films in 1991 film Shikari. He is now currently working in The Drama Company in several others characters. He done lots of tv seriels and movies. He gain the praises from the audience for the role of Kapil’s Dadi in comedy night with Kapil and also won the award for it. After that he play the Nani role in the Kapil Sharma Show he was also acted in recent film Judwa 2. He turned 50 last year and belong to Mumbai.

Raju Srivastava is one of the best funny personalities out there. He mostly plays the role of villagers and get famous due to all of them. He did some TV shows and some reality comedy shows. He has the great sense of humor although he turned 53 last year but hilariousness is never gone out of him. He still preserve the level of comedy inside him.he belongs to Kanpur, Uttar Pradesh, India. He did several cinema and tv seriel like Big Boss, comedy ka Mahamukabla, shaktiman, comedy circus etc. he always appeared as super talented comedian forever. He made his debut though the Laughter Challenge.

Sunil Pal is known for his mimicry and funny face making. He is the winner of The Great Indian Laughter Challenge Show of Star One. He wrote and directed the comedy film Bhavnao Ko Samjho, which includes 51 standup comedian like Kapil Sharma, Jonny Lever, Raju Srivastav, Naveen Prabhakar and many others. Sunil did mimicry of Sunil shetty, Nana Patekar, Nassiruddin Shah, sunny Deol and irfan khan. He was born in Hinganghat, Wardha, Maharashtra, but due to his father’s railway job transfer they had shifted to Mumbai and then he indulge in comedic fever and finally become the great comedian  of Indian Hidtory.